With all the different species of insects and pests out there, there are bound to be some big ones right? 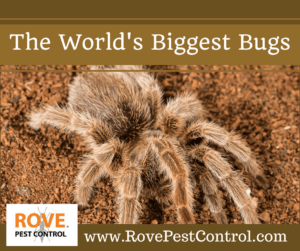 This is one massive beetle and it is probably tops the charts as one of the largest insects in the world. This beetle can grow up to about 16.7 cm in length. You probably won’t find it any time soon in your home though.

The Titan Beetle makes it’s home in the tropical rain forest and tends to live in South America. Little is known about where exactly they make their homes, but similar beetles tend to live in dead wood.

The Giant Burrowing Cockroach makes it’s home in Australia. The interesting thing about this roach is that it isn’t really considered a pest. They are huge though and have an average length of around 8 cm.

It also has the nickname of rhinoceros cockroach because of its shovel like nose/horn. This actually helps it to burrow underground where it also gets it’s real name from.

They have been known to live and burrow up to a meter underground. These roaches are also nocturnal which helps keep them safe as a majority of their predators, like birds, hunt in the day.

This is another giant insect and beetle. This bug gets its name from its horn and size. The elephant beetle’s horn shaped like a giant elephant trunk. Interestingly only the males of the species have this horn and females do not.

It is thought that the reason behind this is that males use this to fight each other over females. These bugs usually come in at about 8 cm for length but when you add in their horn they can be around 13 cm long.

The interesting thing about these “spiders” is that they aren’t really even spiders. They are arachnids like spiders are, but not all arachnids are spiders. The Camel Spider falls into the order of Solifugae, which again is similar to spiders, but slightly different.

They actually have what appear to be another extra set of legs, bringing their total to 10, but it’s actually a special organ called the pedipalps and it is a type of sensory organ.

Camel Spiders can reach up to about 6 inches in length! In addition to being one of the biggest “spiders” out there, they are also incredibly fast and can run up to about 10 mile per hour.

These are some of the longest insects in the world and some have even came in measuring over 20 inches in length. These bug have a lot of predators and they have evolved into having some pretty unique defense mechanisms.

Their most obvious defense mechanism they use is that their bodies really look like a stick or branch from a plant or tree where they live. Some species have been known to release a terrible smell to ward off predators and some also release a liquid that can leave a predator temporarily blind to allow for escape.

These bugs live all over the world. The only continent you won’t find them at is Antarctica. They do like more moderate to tropical temperatures though so you might find them in your country, but probably not too much in your home.

Now this is another huge spider, thankfully you probably won’t find these in your home any time soon, unless you wanted to keep one as a pet. This is the worlds largest spider and can reach up to almost a foot for a leg span.

It is native to South America and spends most of it’s time in the rain forest. This big bug also has several interesting defense mechanisms that allow it to take town it’s prey. It can actually shoot out it’s tiny hairs that work like little rockets. These hairs can cause extreme itchiness and paid when caught in the eyes or mucus membranes of it’s prey or predators.

On top of that, these spiders also have huge fangs and are venomous too. Luckily they aren’t too much of a threat to humans and their venom isn’t deadly to humans if bitten. It sure wouldn’t be fun though.

Check out the video below for one in action!

Obviously there are a lot more big bugs out there but these are some of the most interesting ones we thought we’d share for today’s post!

Did you get value from this post on, The World’s Biggest Bugs, please retweet below!