While all spiders are venomous, most venoms are not a threat to people. In addition, spiders avoid people and will typically bite only when cornered. Despite general human avoidance, the spiders of most importance with regard to bite, venom, or concern about such include: 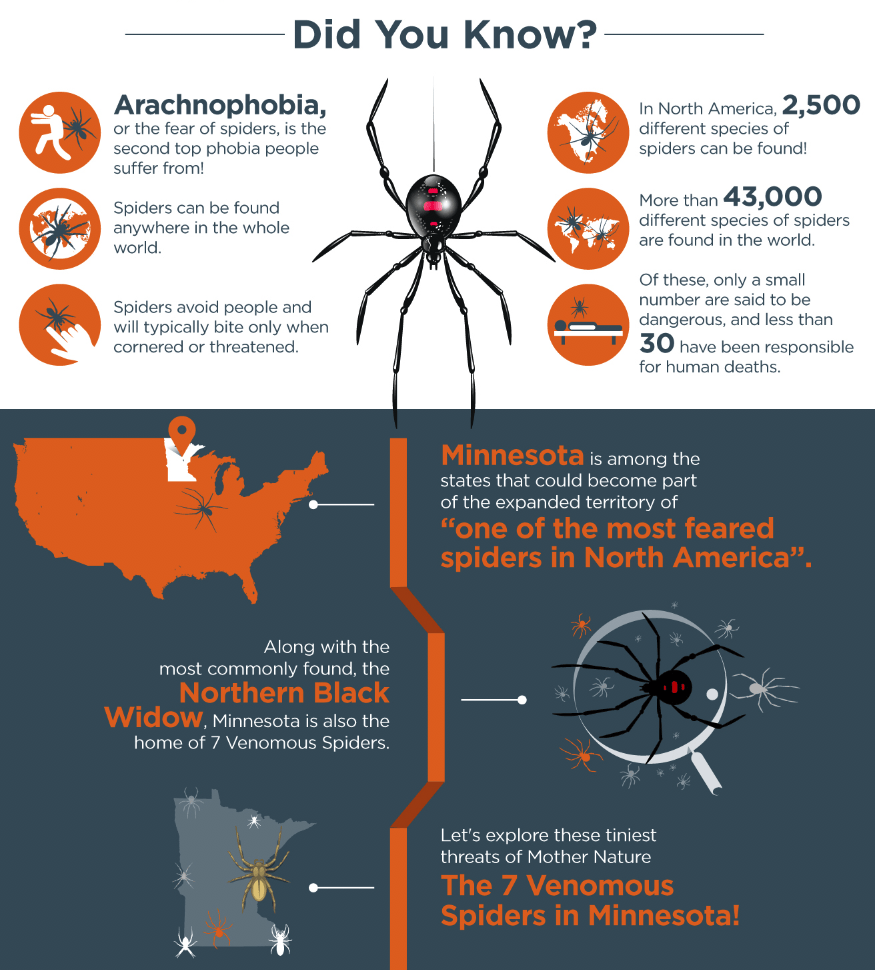 The northern widow is above all, the spider with the most potent venom in Minnesota.

The northern widow is part of the Hourglass Spiders (Theridiidae family) which includes other, more commonly found MN spiders including:

Individual reactions vary and some may not notice any symptoms at all, but reactions may include:

The bite is similar to a pinprick, but the venom is a potent neurotoxin that may cause

Despite the daunting list of symptoms, death rarely results from their bite and is typically associated with other conditions.

It is important to keep in mind that the other cobweb spiders mentioned above do not have a venom that is considered dangerous to humans.

The northern widow is not commonly found in Minnesota, but it turns up from time to time.

Their webs are irregular in formation and small to medium in size. They are most likely to occupy small enclosures especially in and around

The Yellow sac spider (cheiracanthium mildei) is a much more common spider throughout Minnesota. It belongs to the Eutichuridae family along with the long legged sac spider which is also found in Minnesota,

Reactions to bites varies from person to person and may include:

Though mild reactions may occur, the venom is not considered dangerous to humans.  Regardless of the venom, the primary concern stems from a possibility of a secondary bacterial infection from the bite.

Yellow sac spiders are found throughout Minnesota and may be found indoors year round. They may be seen resting on walls or ceilings, but typically hide in silken retreats found:

Signs they are inside the home

It is not uncommon to see the spider itself as the first sign, but their tell-tale sign is their sleep sac. In other words, a small tube or sac that they spin around dawn for sleeping. Despite thick spun sacs, they don’t spin other webs. You may find these sacs in rolled up leaves or underneath logs, but they are just as likely to be in a corner.

3) The Black and Yellow Garden Spider

The Black and Yellow Garden Spideris part of a large family (Araneidae) of spiders common outside of Minnesota homes including:

Their bite is similar to a bee sting, but is not considered dangerous.

Where are they found in MN?

These outdoor spiders that are most likely to build their homes in:

They are likely to be found head down in the center of a large orb shaped web.

Unlike the master web building garden spiders, the Wolf spider (arctosa rubicunda, geolycosa missouriensis) of the Lycosidae family is plentiful in Minnesota and is an avid hunter. Despite this spider’s aggression toward its prey, it wants nothing to do with human beings wandering around – even the tiny toddling ones.

Though their bite may be as painful as a pinprick up to a bee sting, the venom may cause numbness, but is not usually dangerous to humans. However, secondary bacterial infections from bites are a possibility.

Wolf spiders thrive in all corners of the state of Minnesota beneath stones and debris, but as temperatures drop, they tend to move indoors.

Signs of their presence in a home

Since wolf spiders are active hunters, the first sign they are in your home is typically the sighting of the spider itself.

Jumping Spiders (Salticidae family) are a colorful spider variety in Minnesota. In addition to color, the movement of the:

is likely to catch your eye.

The bite is similar to a bee sting, but the venom is not usually dangerous to humans.

Signs they are inside the home

They often will hitchhike into homes on clothing and pets, so you may not have a warning that they are present until they pop out in short, quick bursts. They hop more then run or crawl – hence their name.

Nursery Web Spiders of the Pisauriadea family found in Minnesota include:

They are quite large with an impressive leg span that can give even the calmest of nerves a jolt when they appear.

These giants of the spider world carry a bite similar to a bee sting, however the venom is not usually dangerous to humans.

Where they are found

With Minnesota’s plentiful lakes, these spiders live throughout the state in:

As the list suggests, these spiders are not likely to be permanent indoor dwellers.

The Woodlouse Hunter of the Dysderidae family has a fierce appearance including some threatening fangs.

Their distinct fangs may deliver a painful bite, but the venom is not dangerous to people. However, secondary bacterial infections from their bites are possible.

These dusk hunting spiders roam throughout rural and residential areas in:

Signs they are in the home